On Thursday August 18, 2016 I hosted the Vienna Tester Gathering together with my colleagues from
EBCONT proconsult Eduard (@), Melanie and Dominik. The topic was the EuroSTAR 2016 conference theme
“Learning to Test, Testing to Learn”.

I usually organise the Vienna Tester Gathering somewhere in a pub in Vienna as a kind of a regulars table for people interested in software testing and quality assurance.
However for the EuroSTAR Roadshow we decided to choose a different location. So this time we met at
Stockwerk Coworking space. They have got a really nice event location with a small wooden stage and there
is also a bar included. It’s absolutely recommendable if you want to organise an event in Vienna.

The planning of the gathering was mainly on Meetup.com, XING (which is a networking platform like LinkedIn for the
German area) and Twitter.

According to the RSVPs around 15 people signed up for the event. However in the end only 8 testing folks showed up.
Personally we were a bit frustrated. We put in a lot of effort and people sign up and don’t come.
Nevertheless I reminded myself of one of the Open Space format principles – Whowever shows up is the right group.

Additionally to the lean coffee we wanted to draw a big sketchnote poster with the outcomes of our discussions.

The original plan was to split the group forr two lean coffees. One about “Learning to Test” and one
about “Testing to Learn”. Because only 8 people attended we had to be a little bit agile with our schedule
(Reacting to change over following a plan). Instead of doing a lean coffee in two groups we spontaneuously decided to sit down for 15 minutes and write down all our thoughts, ideas and whishes etc. on post-its.

This went quite well. A lot of notes were created.

After the 15 minutes everyone presented his/her ideas and put the post-it onto the table. Whenever someone had a similar
thought or iead we immediately put the notes together to group them.

Then it was time for a little drawing exercise. I brought the Sketchnote Handbook with me so we can cheat a little bit.
Well, I would not say cheating. It was more to get inspirations and ideas on how to draw the notes onto the white paper.

EuroSTAR provided us with some goodies. We simply used the sheets provided for announcing the event as a playground for our
drawings.

One discussion was about technical awareness. We all agreed that it is important for a tester to understand what the
rest of the team is talking about. A Tester does not have to be a specialist but keywords like JUnit, JSON, SOAP, REST
should sound familiar. To some extend it is also handy to know a bit about programming and scripting, especially when it comes
to test automation. Big tool vendors provide nice tools for non-programming testers, however when you want to dig a bit deeper
and you face some challenges you might need to adjust an existing script or write some new code.

We were also talking about testing early on in a project. When does testing start? Can we define some test cases before we even
start with the first line of code? Yes we can. And yes we should. We should think about testing before development starts. We need to be clear about test environments, budget, people from the early beginning.

What else can we do to learn to test? We could go to local meetups, conferences, listen to talks and watch tutorials on Youtube. We could also organise company internal testing events – not only for tester but also for developers, requirements engineers etc. to talk about things that work and do not work in a project/company environment. We could read developer blogs to see what problems are there with certain languages. Maybe it affects your project as well.

That’s all very theoretical so far and therefore we simply need to test to learn testing. We have to get the devices, try out new things, think outside of the box, experiment and explore.

One point that will come up pretty soon is the Internet of Things and all related technologies like micro-services and so on. How do we test without a user interface? How do we test all the different devices? That is a hard challenge not only for tester but also for the whole organisation.

In our discussions we discovered that Learning to Test and Testing to Learn are interconnected. You learn to test by doing it and then feed back the learning to yourself to your team or the whole community.

A bug loves company. When you find a bug dig deeper. It might not be the only one in this area.

Create a list of known (fixed) bugs. Maybe you can see a pattern and learn from it. Someone mentioned doing a Root-Cause-Analyis on bugs (5 Whys) and try to fix the root cause.

When we find a lot of issues in a specific area we learn that we do not understand that area particularly well or it is a complicated area that needs more attention. Do not ignore such facts!

Finally there was a great input from an attendee (who is actually a med. doctor). Test your tests regularly. Are the tests sill valid?
Are the tests correct or is it just an assertTrue(true) and noone ever looked into that.

When we test we always learn about the application, the ways it works the way we as a tester work and the way the developers work. As mentioned earlier learning to test and testing to learn are interconnected.

To sum it have I have to say that in the end we met our goal – which was to draw a big sketchnote poster for the theme – although we were only a small group of people.

A special thanks goes to our company EBCONT proconsult for sponsoring the drinks for the event and to Stockwerk for the location.

Thank you to everyone who showed up and maybe we see each other in Stockholm for the EuroSTAR 2016 conferenece.

Inbetween – Learn to test and test to learn!!! 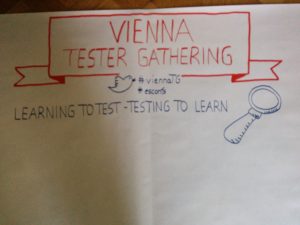 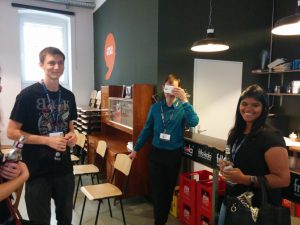 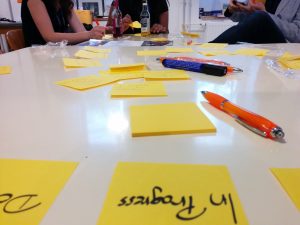 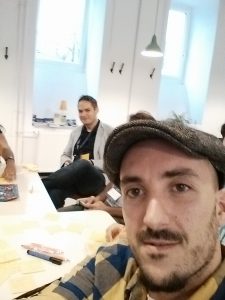 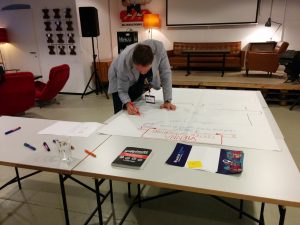 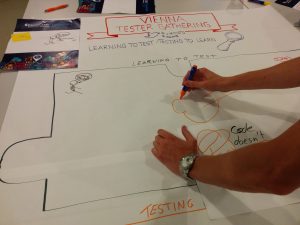 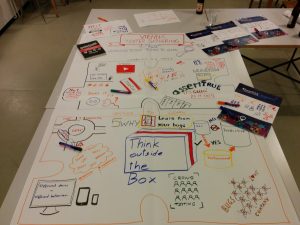 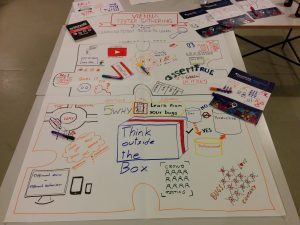 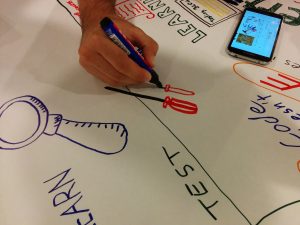 MFF OH – Retrospective
Austrian Testing Board – Agile Testing Traps
We use cookies to ensure that we give you the best experience on our website. If you continue to use this site we will assume that you are happy with it.Ok